On Tuesday, November 10th Jack Keller will take to the fly tying bench and teach us two versions of the Hammer Head fly. One of the versions is intended for carp and the other for inshore species like redfish.

The Carp Fly version looks similar to a crawfish. The extra weight is provided by tying in a series of bead chain eyes so that two beads protrude from each side. This should get the fly down to feeding carp. I've had a chance to make casts with the fly and found no problem at all casting it even in the wind.
The buggy pattern is certainly to immitate different prey species. Although it is labeled a carp fly here, I can't see why it wouldn't work on Guadalupe bass or large bream.

We're going to tie it on a saltwater hook just in case you get the urge to try it on the Laguna Madre. This pattern will be followed by another pattern. Although related its slightly different and intends to immitate a crab.

The Crab pattern is similarly tied and should entice a redfish rooting for crabs on grass flats. This fly looks even easier to cast than the carp version. Hopefully, it makes enough of a plop as it hits the water to catch a predator's attention. I wouldn't be surprised if a sheepshead doesn't think of it as a meal. Those rascals are sometimes picky and easily spooked and its appearance would not be threatening. The added beads shouldn't cause a loud enough sound to scare off a fish.

Hope to see you this next Tuesday, November 10th at the Bass Pro Shop meeting room. The session will start at 6:30 p.m. Members tie free and non-members can join RGVFTC or pay a $3 fee.

Posted by Unknown at 5:01 AM No comments:

Posted by Unknown at 4:16 PM No comments:

The next fly tying session will feature a version of the Gartside gurgler. This pattern is very effective and has landed me my largest Laguna Madre redfish. Tied on a Mustad 37004 long shank hook it resembles a very noisy shrimp on the surface.

We'll be meeting at the Bass Pro Shop meeting room to the right as you come into the Fish Bowl Restaurant. The meeting will start at 6:30 p.m. Hope to see you there. Below is a sample of the Buggy Gurgler. 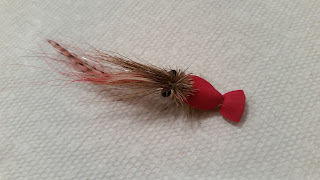 Posted by Unknown at 7:31 PM No comments:

Dear IFFF Member, We are sending you this email for your information and just in case your latest edition of the Flyfisher magazine containing the Fair Registration Guide has not reached you yet. Fair registration will open June 8th at 9 am MST. Before you register for the Fair you will need your membership number, or you can join when you register. If you cannot find your membership number, please call our office prior to June 8th. If you are not a member you can still register, however only members get discounted pricing on workshops. We are open 8 am to 5 pm MDT. We will be inundated with phone calls the morning of June 8th and some workshops fill up quickly, so we strongly encourage you to call us prior to registration opening. In order to give you a few extra days to peruse the available workshops, here is the Fair Registration Guide. To see new workshops, please go to the registration page, listed under Fly Fishing Fair on our web-page. Even if you are not taking workshops you must still register for the Fair to get name badge (for entrance to the Fair), a registration packet, and to purchase meal tickets. Meal tickets are limited for each meal, if you do not purchase your ticket early, you may miss out! To register go to the Fair main page on our website and there will be a “Register Now” button for you to click to get started. Have your member number ready and we advise that it may help for you to fill it out the registration pages and have them beside you when you start. Don’t forget to have your credit card too. Don't forget a fishing license! If you're planning to take on-the-water workshops or just do some recreational fishing while in Bend, you will need an Oregon fishing license; which you can buy online and print before you even leave your house! The Oregon Department of Fish and Wildlife's website is where you can purchase licenses. This link (click here) will take you to an information page and the "Buy Now" button on the right is where you go to purchase. Our host hotel this year is the Riverhouse Hotel and Convention Center. Rooms are filling up fast, make your reservations now! We hope this information has been helpful to you and we hope to see you in Bend this August. Feel free to call our office if you have any questions. Thanks, IFFF Staff
Posted by Unknown at 6:26 PM No comments:

This classic pattern is a favorite for tarpon fishers all over the world. Tied on a sturdy saltwater hook the black and red pattern has been an effective pattern.

This pattern is probably more well-suited to cold-water steelhead fisheries, but Jack Keller uses these flies for many of our inshore and near-shore species. If you have never tied a tube pattern, here's the day to learn. This is also a pattern that we're going to fish pretty soon under the lights.
The session will be held at the Bass Pro Shop meeting room on Tuesday, March 10th at 6:30 p.m. Charlie will bring some tube fly equipment. This should be new experience for most. So we hope you can make it.
Rey
Posted by Unknown at 8:12 PM 1 comment:

It was just a few weeks ago that we planned on getting together and finding some locations that we could take our fly tying club members to fish. One of those places was my friend's place on the Arroyo Colorado. As you learned from the previous post some of us got together to help with planting the sand dunes at South Padre Island. There we finalized plans to meet at Chili Willies for dinner and then head to a possible fishing spot that evening.

Before we headed to the fishing spot, we ate burgers, calamari, and several other Chili Willie's dishes. Of course, I had turned on the fishing lights to attract baitfish and shrimp, just to entice some seatrout and redfish to lurk before we got there. Charlie Villarreal, Mike Gonzalez, Sheala Castillo, Irma Ramirez, and my sister, Dora Rivas had a good time eating and drinking before heading to the fishing spot. Mike and Sheala's daughter, Isla, wanted to see a fish, so we couldn't disappoint her.

Both Mike and Charlie casted clouser-type flies into quiet water. Schools of baitfish would scatter at times. We were certain that predatory fish were below the water. At around nine, Mike and Sheala prepared to leave and went into the house to say their good-byes to Dora and Irma who were catching up on family things.

Charlie knew that the bait was a good indicator that something was making the bait nervously jump out of the water. Not long after Mike and Sheala went in to the house, Charlie hooked on to a small redfish. At first, we didn't know what that silvery fish was that was tugging so hard. It wasn't a keeper, but he was feisty. Charlie's rod had a good bend in it and it didn't show itself at first. Finally, we figured that it was a redfish and carefully brought it near the dock.

At the same time, I remembered Isla's wish and ran (OK, maybe not a real run) to the house. Mike, Sheala, and Isla came outside to see the outcome of Charlie's attempt to catch his first fish of the year. He was a happy camper and so was Isla. She starred at the fish with her eyes wide open and an unsure smile. Eventually, she was so comfortable with the site that she touched the fish.

We did our deed. Isla got to see and touch her fish. Her parents say that she "likes" fish. I think it was fitting to show her that fish are important to our natural world and she got to see all of us treating the fish with respect by releasing it to grow some more.

Hopefully, we can have more children come and join us at some future outings. The inclusion of moms, dads, and kids at events like these will help to raise awareness to the pleasures the outdoors brings us. Also, its noteworthy that participating in events that encourage service to the environment are important. Today's double duty was a good example of what we can do in the future.

We also need to remember that we're about fly fishing and that fly tying is only one part of the process. Events can be structured so that we can participate in fly tying earlier during the week, have a service event and follow it up with a fishing/social event. Hopefully, we took this opportunity as the first look at this venture as a possibility.

Charlie didn't end with his redfish that night. He followed it up with two keeper seatrout. The photographs that follow attest to his tube fly's ability to draw strikes even when the night is slow. I checked out the lunar tables and the fishing activity was slow. We were done by 10 p.m. and had three fish photographed and released. Can't ask for anything better. Congratulations Charlie.

Posted by Unknown at 5:10 PM No comments: 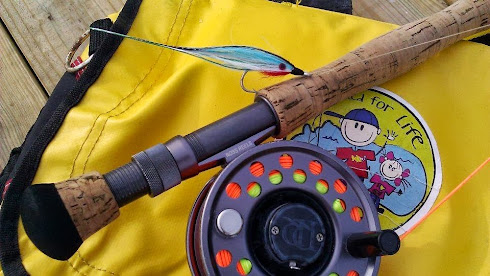